It’s July and it’s hot on the pier. They should disembark at about 4pm but we are all here roasting under the sun one hour earlier. There is an annoying wind spreading dust and sulphur in the air that, anyway, helps us breathe. All of a sudden, we are told that we are on the wrong pier, we take the cars and move. All around people look tired and worried. It’s the time when the NGOs operating at sea are attacked by the media. They have suddenly become the enemy number one, the enemy to fight in order to stop the alleged invasion that exists only in the mind of those who create hate. It’s that time when each word is weighed for fear of falling into the trap of the propaganda. It’s the time when solidarity becomes a crime, saving life is something to be ashamed of and staying human is the only sensible challenge.

The big boat appears over the horizon, we start preparing for the disembarkation that starts slowly. First the families, the women with small children. Three of them look like they are ready to go to kindergarten, if it weren’t for the bare feet and the fear into their eyes. In the afternoon heat, we wait for them on the pier, hoping to be useful and exchanging with the survivors smiles concealing distress and hope. The atmosphere is quiet, occasionally a kid laughs, a woman is positioned on a stretcher and taken into the ambulance. She is not critical fortunately. 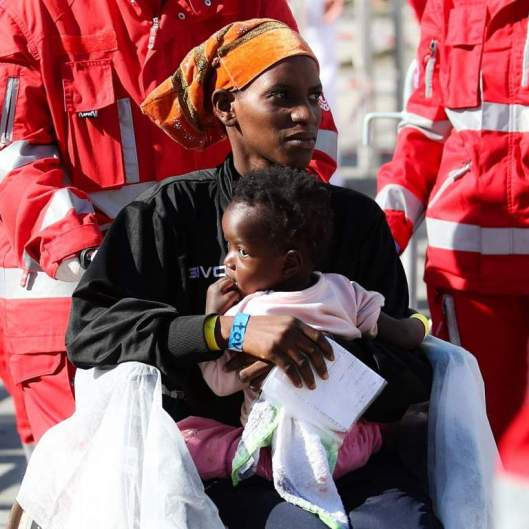 After a while, after families, women and children have disembarked, I go to the tent where the newcomers are identified and given an accommodation: two big tents, some containers and a space with toys for the kids. Those toys on the boiling tarmac, those colours against the grey of the street, are a slap in the face. Many children play, they chase each other and seem happy. But that’s not right: this is not a place for playing, it’s not a place where they should spend even one minute of their precious childhood.

I move closer to the bigger tent and I see a kid, about two years old, in the arms of his father who is looking at me. We smile at each other and he comes near me, he gives the baby to me. They are from Mali, the mother is also there clapping her hands to encourage me to hold her child in my arms. The little one is not very happy and keeps looking at his parents and in the meantime he enjoys the kisses and cuddles of a stranger. We take a picture together: had we not been at the port under the blazing sun after disembarking from a journey of hope, we would have looked like a normal family at the park on a Sunday afternoon. I give the kid back to the father, we say goodbye and I enter the tent: mothers and children everywhere. One of them looked so peaceful in his mother’s arms. She is beautiful and moves gracefully. While I’m busy looking at them, a skinny woman in her forties arrives. She is from Syria and is there with her 16 years old niece. They don’t speak English, they take me aside and touch their stomach “Blood, blood. Please help.” They have their period, they need tampons. It happens that I have two in my bag, I give it to them and I go looking for more while trying to forget the woman’s embarrassment when asking. When I get back with a full pack, they hug me and laugh.
As if having to face a terrible trip is not enough, the period makes things worse.

I don’t have time to stop and think when a little group of Somali girls motioned for me to go closer, they have a munchkin in their arms: a tiny girl wrapped in a pink blanket. I could hear a very thin breath. Her mother is wearing a light blue veil, she is minute and tells me she is 20 years old and that she had her baby in Libya 15 days before. She doesn’t speak English either, only a few words to say “beautiful”. Yes, the baby is adorable. She puts her into my arms as if she were a doll, she quickly turns around to check if someone is looking and she talks looking straight into my eyes “Take her away. Away.”
Her eyes look beyond the field, where life is, towards the road and the city. Where there are no ghettos, queues and documents that are impossible to obtain. A very young mother that had that baby who knows where and with whom is asking me to take her daughter away. I explain that it’s not possible, that that baby’s life, so light in my arms, would become a massive bureaucratic burden. I tell her “no possible. All the best” while we hug with the baby between our hearts. I decide to call it a day. I get into my car, I leave the port, shortly after I stop in an place overlooking the entire area. It’s almost sunset and the beautiful colours make the ugliness of the world in which I live unacceptable. My mother calls me to ask if I go to hers for dinner, I say yes trying to sound as normal as possible. When I arrive at home, I break down and I tell her about that woman and that baby. I tell her that, for a moment, I imagined the baby wearing aunty’s handmade hats and blankets, daddy singing to her to make her sleep and I thought of the deported Jews who left their children with whoever had the courage to save them. We forget about dinner. We are not hungry anymore. I go back to my house, everything is huge. The bed is so big that it might perfectly well have taken that creature and her mother. I cling on to the law, to the bureaucracy, to the rules and try to find excuses. But it doesn’t work. I think about the girl asking me to save her daughter who is slowly breathing between my arms and about myself, I have been wondering whether saying no was the right to do since that day.